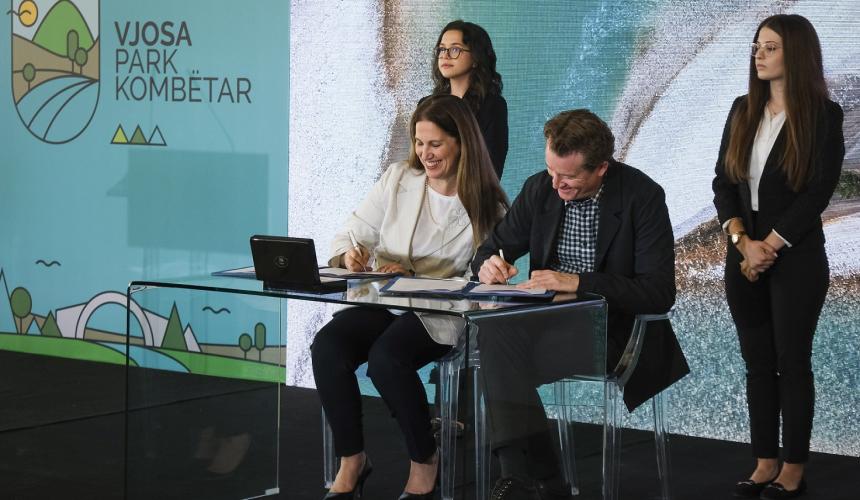 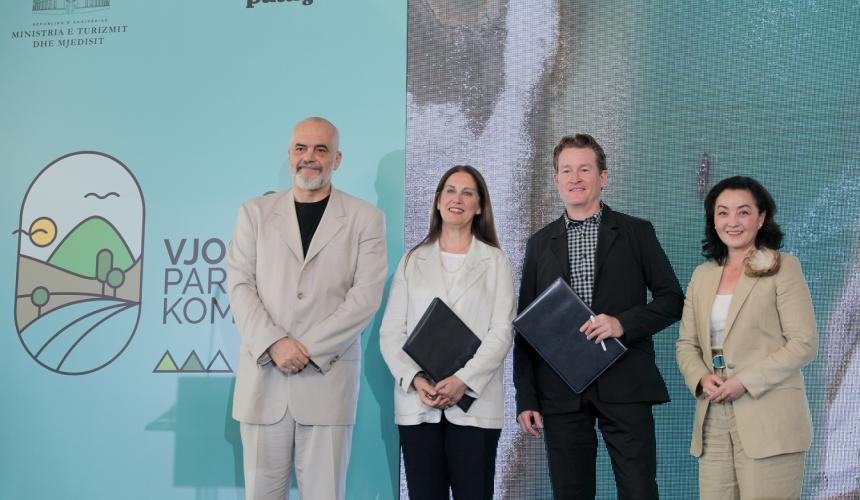 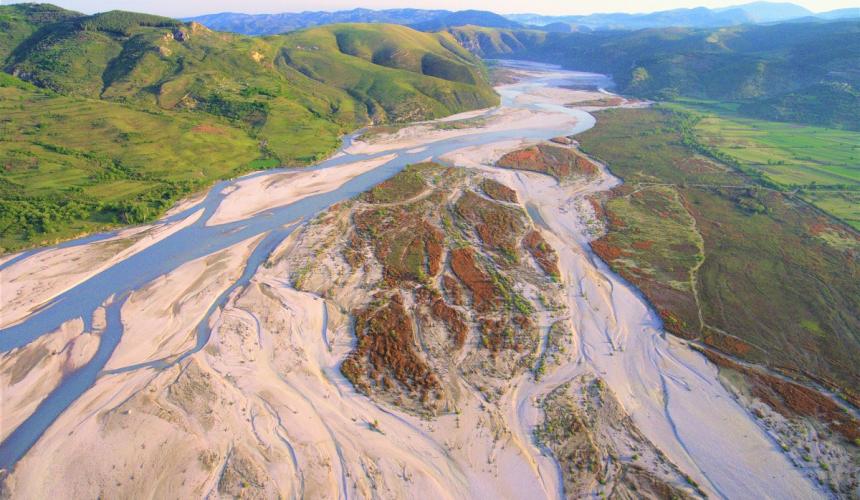 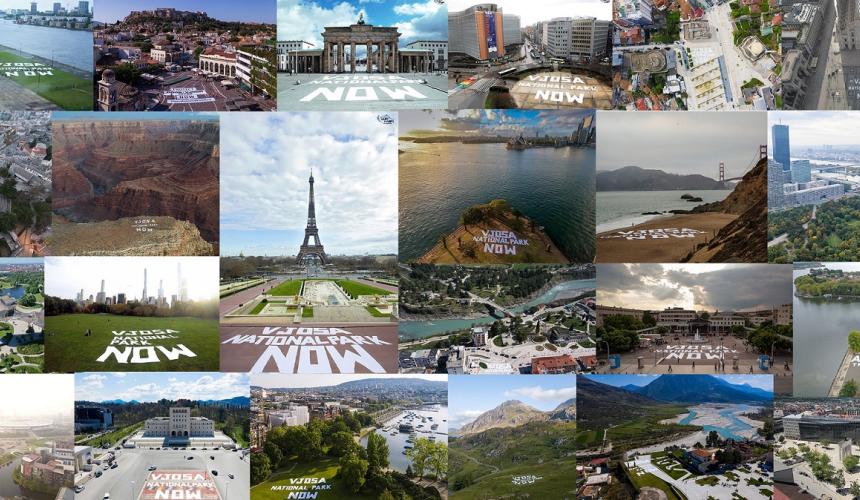 Tirana, Albania, 13 June, 2022 - After ten years of dedicated action by local communities, environmentalists, scientists and artists to permanently protect the Vjosa River and its tributaries, today, the Albanian government took the historic step of signing a commitment to establish a Vjosa Wild River National Park. The Wild River National Park will protect the entire network of the Vjosa from the Greek border to the Adriatic Sea, including the free-flowing tributaries. This is something that has never been done before in Europe.

This morning at the National Theater of Opera and Ballet in Tirana, Prime Minister Edi Rama, Minister for Tourism and Environment Mirela Kumbaro and Patagonia CEO Ryan Gellert joined Albanian and international NGOs from the Save the Blue Heart of Europe coalition in a ceremony to mark the public signing of a Memorandum of Understanding between Patagonia and The Ministry of Tourism and Environment. This is a significant step closer to safeguarding the last big, wild river of Europe.

The Memorandum of Understanding between the two parties includes the agreements:

According to the Memorandum, the signing parties will establish a working group within 30 days to start planning for the establishment of the national park. The park is set to include visitor centers, rangers, and scientific and educational programmes and will yield new economic opportunities for the local communities. This novel action taken by the Albanian government will also serve as a role model for many other rivers in the region; including the Aoos River in Greece which is the source of the Vjosa across the Greek border.

Besjana Guri, Communications Manager, EcoAlbania states: “While there is much work to do before we can guarantee the future of the Vjosa, this is a major milestone for Albania and for river defenders everywhere. The ambition of creating Europe’s first Wild River National Park is one step closer to becoming a reality.”

Ulrich Eichelmann, CEO, Riverwatch adds: “The message that comes from Tirana today has the potential to extend far beyond the Vjosa - the concept of a Wild River National Park which protects not only the main waterway, but also its tributaries, is unique. At the Vjosa, we are witnessing a new model of protection for other rivers in Europe, which are threatened by dam projects and other forms of pressure. We need to think bigger to protect our nature.”

Gabriel Schwaderer, Executive Director, EuroNatur comments: “The European Union has set itself the goal of protecting all free-flowing rivers in the EU within the framework of the European Green Deal. Albania is setting a good example by deciding to protect the Vjosa and its tributaries as a national park. We call on EU member states to protect their free-flowing river stretches and to increase the connectivity of river ecosystems through restoration.“

Ryan Gellert, CEO, Patagonia says: “Albania’s leaders have shown vision and commitment today, signaling to the world their intention to do something unprecedented in nature protection. Through our long-standing partnership with the NGOs behind the Save the Blue Heart of Europe campaign, we have learned first-hand just how exceptional the Vjosa is, and are therefore humbled to work alongside the government and groups, devoting our skills and expertise to the establishment of Vjosa Wild River National Park.”

With Patagonia’s long history of protecting wild places, and the Albanian Government’s commitment to do something truly impactful, the Save the Blue Heart campaign members, such as EcoAlbania, Riverwatch and EuroNatur, are going to be actively involved in the journey ahead, to make Europe’s first Wild River National Park a reality. With official, actionable steps, this unparalleled biodiversity hotspot will set a precedent for future nature protection in Europe.

About the Vjosa River in Albania: The Vjosa River in Albania is the last big, wild river in Europe, outside of Russia. The river and its tributaries flow freely from the mountains in Greece, where it is called Aoos, to the Adriatic coast in Albania. This wilderness area is made up of an enormous mosaic of different habitat types, from the narrow gorges in the upper part, to the wide braided river sections in the middle part, to the near-natural delta at the Adriatic Sea. The middle stretch alone is made up of at least eight habitat types that have the highest conservation importance, at EU level.

The Vjosa River and its free-flowing tributaries form an ecosystem with substantial biodiversity of national and global significance, and the outstanding scenic values of the valley are the result of undisturbed natural processes. The ecosystem is host to more than 1,100 species of animals, including 13 globally threatened animal and two plant species. These ecological and cultural values provide great opportunities for eco-tourism and other economic benefits to the people in the region.

The surrounding watershed provides the villages with fertile land for agricultural activities such as crop production and livestock farming. The abundance and diversity of fish is vital for the well-being of local fishermen mostly in the lower part of the Vjosa. Eco-tourism on the Vjosa and its tributaries is ever-increasing, particularly in recent years in which enthusiasts have started to enjoy activities such as rafting, canoeing, kayaking and swimming.

More information about the #VjosaNationalParkNow campaign can be found HERE.

About EcoAlbania: EcoAlbania is an environmental NGO based in Albania that is working for the protection of the Vjosa River since the NGO started in 2014. In collaboration with the international NGOs Riverwatch and EuroNatur, the organization is implementing the Save the Blue Heart of Europe campaign in Albania.