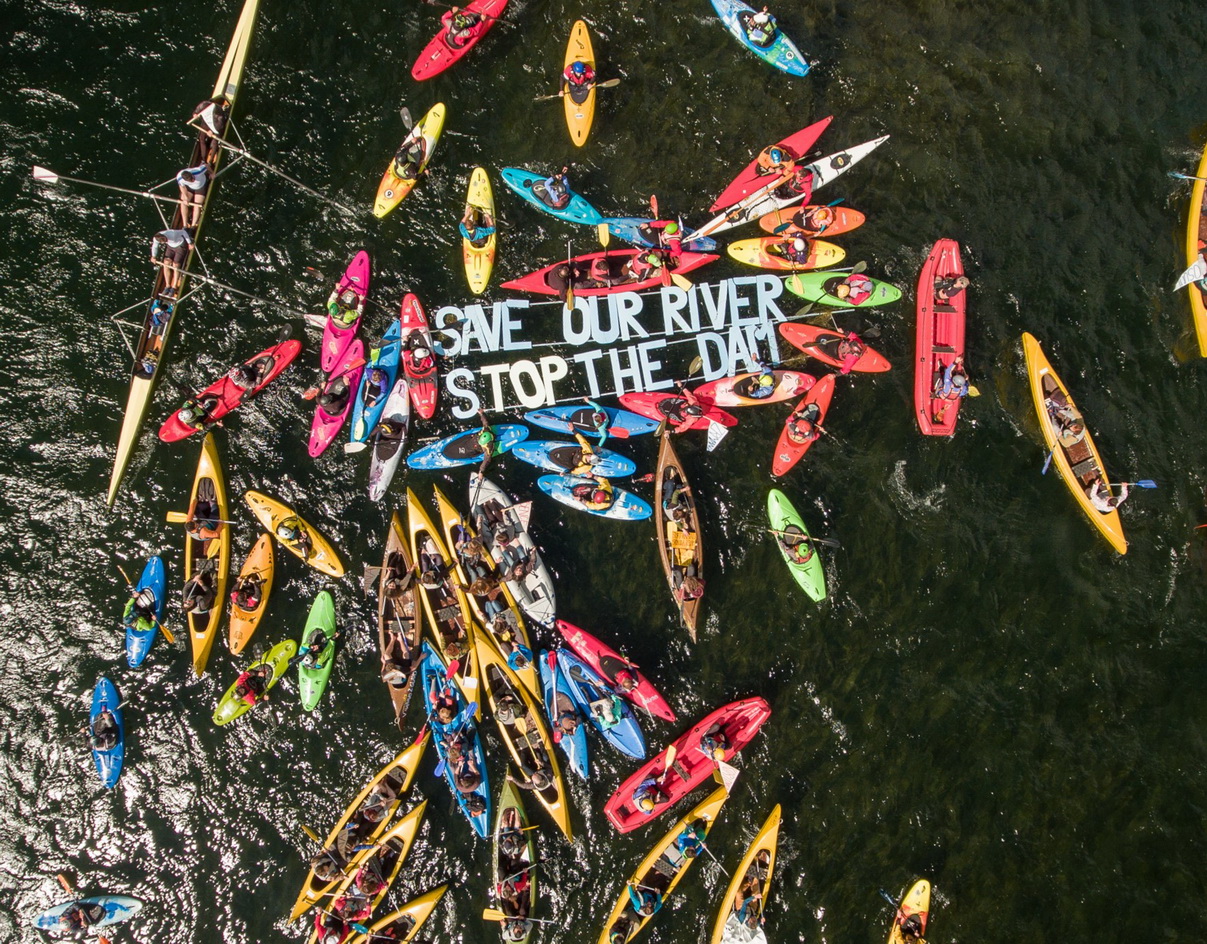 Paddling against the dam tsunami

++ Grand kayak tour to save the Balkan Rivers starts today ++ Bohinj, Slovenia, April 16, 2016 Today, about 150 paddler are opening the Balkan Rivers Tour on the Sava river in Slovenia. Led by former Slovenian Olympic athlete Rok Rozman, kayakers from all over Europe will paddle the most stunning and most threatened rivers in the Balkans over the next 35 days. This is without par in Europe. With this tour, they are taking a clear stance against the imminent dam tsunami: about 2,700 hydropower plants are projected to be built between Slovenia and Albania.

The starting signal was given at Lake Bohinj in Triglav National Park, through which a headstream of the Sava flows through. On the lake, kayakers posed around the message “Save our rivers – stop the dams!” In the coming five weeks, kayakers will paddle 18 rivers in Slovenia, Croatia, Bosnia & Herzegovina, Montenegro, Macedonia and Albania. Special events are planned on many river stretches in order to support local initiatives in their fight against dam projects.

“This unique activity shows that the Balkan Rivers are more than just suppliers of megawatt hours. They are lifelines that provide recreational value to people and habitat for species. We need to defend this European natural heritage against the greed of companies and banks for profit,” says Ulrich Eichelmann (Riverwatch), coordinator of the “Save the Blue Heart of Europe” campaign. Most projects have not yet been realized, but time is pressing. “When I was a kid my dream was to win Olympic medal in rowing rivers. As a grown-up, my foremost goal is to protect these rivers. I didn't get the medal but I will do everything I can to help saving the rivers on the Balkans. I invite kayakers from all over Europe to join the tour and support us in this effort”, says Rok Rozman, initiator and head of the Balkan Rivers Tour.

It is no coincidence that the tour starts on the Slovenian Sava. Virtually every free-flowing section of this river is threatened by hydropower projects, even within protected areas or stretches that host population of endangered species such as the Danube Salmon (Hucho hucho). “We cannot demand from other – often poorer – countries to protect their rivers while we let our hydro lobby destroy almost every single meter of the Sava in Slovenia. We need to stop this dam craze!”, demands Neža Posnjak, coordinator of the “Save the Blue Heart of Europe” campaign in Slovenia.

The tour will end with the handing over of a petition for the protection of the Vjosa to Albanian Prime Minister Edi Rama on May 20. The Vjosa is the last big wild river of Europe (outside Russia). Here, too, hydropower projects are planned. “We want to prevent these dams to be built and instead advocate for the protection of the entire Vjosa as a national park. This would be the first Wild River National Park of Europe”, says Theresa Schiller, coordinator of the campaign “Save the Blue Heart of Europe” at EuroNatur Foundation.

To Martin Šolar, director of WWF Adria, these rivers from the Alps over the Dinarides to the Southern bottom of the Balkan Peninsula are the lifelines of the region: “We are working on several rivers throughout the Balkans and dams are the most serious problem we are facing. A hotspot of incredible biodiversity is at stake. Therefore, we are happy to join our forces and support this tour.“

The opening event of the tour at the Sava was supported by local outdoor initiatives and the Bohinj Tourism board.

Background of the tour