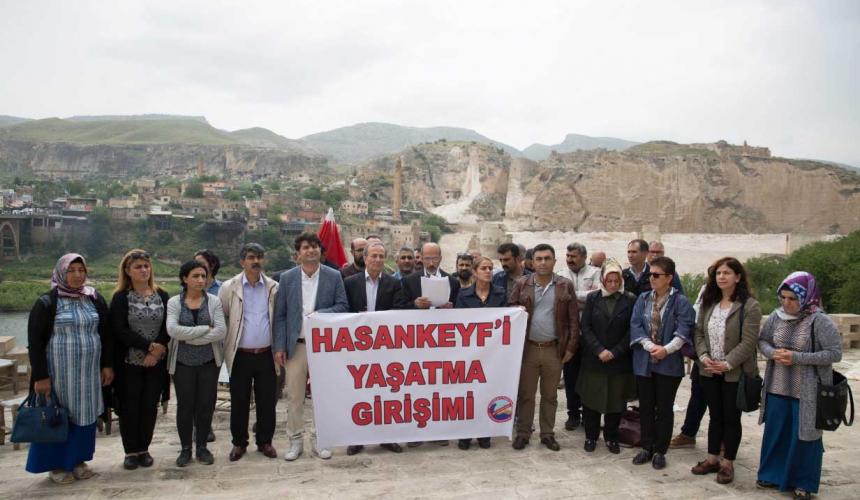 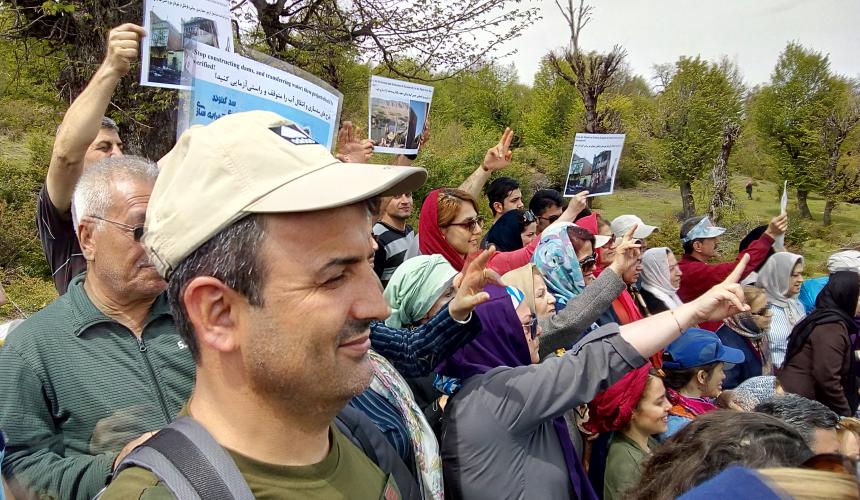 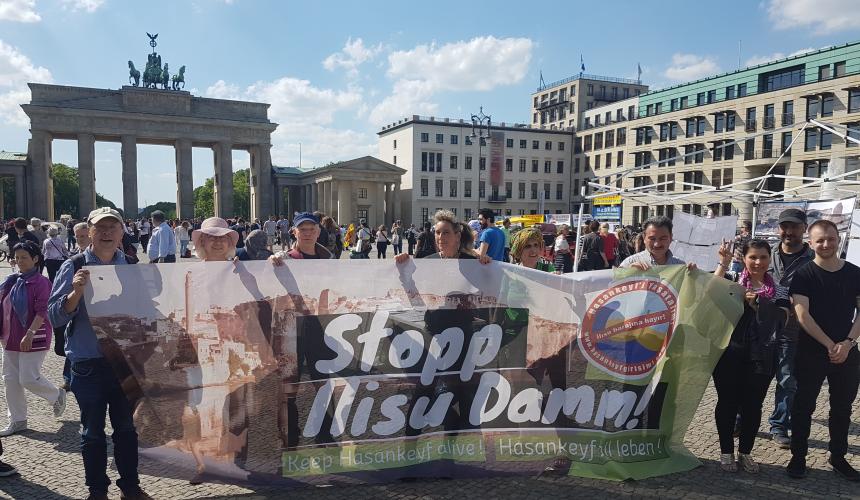 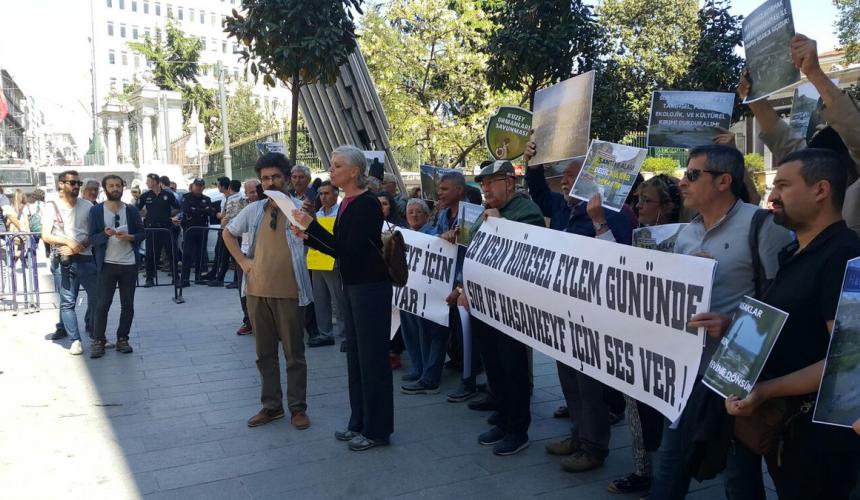 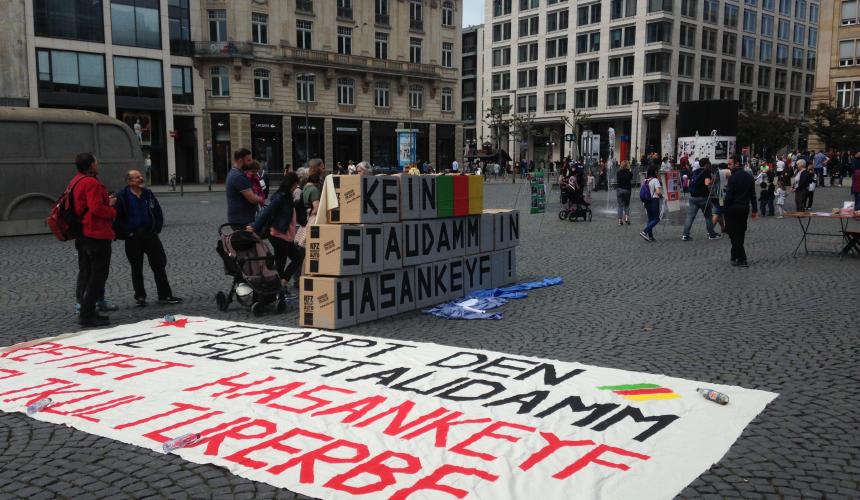 In solidarity with the two antique cities Hasankeyf and Sur, which are both destined for destruction by the Turkish government, actions in 30 cities around the world have been organized to draw attention to repressive and exploitative policies. Hasankeyf is to be drowned in the reservoir of the almost finished Ilisu dam project.  Ilisu is opposed by the overwhelming majority of the public. Read this press release...

Diyarbakır (Amed), 29.04.2018. As part of the Global Sur and Hasankeyf Action Day in almost 30 cities actions have been organized on April 28, 2018. Activists and civil organization raised awareness on the ongoing destruction of the two antique cities Sur and Hasankeyf at the Tigris River in North (Turkish) Kurdistan. In the last years Sur and Hasankeyf have become synonyms for the repressive and exploitative policy of the Turkish government against nature, culture und people.

The 12.000 years old town Hasankeyf and the surrounding Tigris Valley are threatened by the Mega-Dam Ilisu Dam in construction which is one of the most controversial dam projects in the world nowadays. It would destroy the livelihoods of up to 80.000 people in North Kurdistan and probably much more in Syria and particularly in Iraq.

Sur is the old town of Diyarbakir which has been attacked brutally by the Turkish government with military after the war in Kurdistan has restarted in summer 2015. Although part of the UNESCO World Heritage Site of Diyarbakir the state destroyed systematically half of Sur, 23.000 people have been displaced and a culture of thousands of years eliminated.

On the morning of April 28 dozens of activists, displaced people, NGO representatives, artists, oppositional politicians gathered in front of the Big Mosque (Ulucami). Surrounded by police they did a statement against the ongoing destruction which has been described as the implementation of a long-expressed aim to gentrificate and to change the demography of Sur. The stop of the destruction and a new approach with the return of displaced people to their neighborhoods has requested in speeches. The action day continued in a courtyard of a traditional Diyarbakir house in the non-destroyed part of Sur.

At the same time dozens of activists, displaced people, NGO representatives and oppositional politicians from Hasankeyf and Batman gathered in the city of Hasankeyf. In their statements they criticized the ongoing destruction in the city since summer 2017 and emphasized that the resistance will continue although the dam construction has proceeded. The Ilisu Project is not wanted by the big majority of the society which will have no benefits from that project. Rather it should be aimed to consider the Tigris River as a heritage and a medium for peace between the people of the whole basin.

In the two antique cities, which have been inhabited continuously, it was stated that the current policy is a cultural genocide. As Sur and Hasankeyf are world heritage sites, worldwide the democratic organizations and people should raise awareness on them and act against the destruction on international level.

Apart from Sur and Hasankeyf actions have been carried out also in the cities of Urfa, Van, İstanbul, İzmir, Ankara ve Antalya which is an expression of solidarity in the broader society.

On international level in total in more than 20 cities actions have been realized of which Germany was leading with ten cities. The actions had a diversity from manifestations, information desk, picture exhibitions to film screenings and discussions. In these actions the relationship to global neoliberal and war policies has been set and the own governments as well as international organizations like EU, UN and UNESCO have been criticized heavily. Thousands of people have been contacted and informed in the following cities: Athens, Bilbao, Barcelona, Ribes (Catalonia) Madrid, Martigues (France), Brighton (UK), Londra, Stockholm, Vienna, Berlin, Hamburg, Hannover, Bremen, Celle, Frankfurt, Freiburg, Karlsruhe, Regensburg, München. Additionally, in several Swiss cities at the May 1 rallies flyers will be distributed and speeches held.

One of the most important participation to the action day was from Iran. On April 25 and 27 in two cities discussions and manifestations have been organized by groups which have been in contact with some of the calling organizations for years. In Iran is a certain knowledge on the Ilisu Dam and its larger impacts which spread until the South of Iran. In 2017 was a strong petition to the UN which 150.000 people have signed.

Do not allow to destroy settlements and nature, lets defend common history, nature and culture!

Find all photos of the Global Sur and Hasankeyf Action Day here: http://www.hasankeyfgirisimi.net/?p=676